Candy is a Halloween Tradition 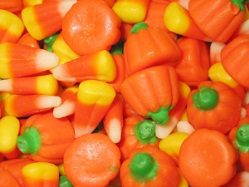 The origins of Halloween go back to pre-Christian times, to when Celtic groups celebrated their New Year’s Day on November 1. This day was called All Saints’ Day, and October 31 was called All Hallows’ Eve or Hallow e’en, which we today call Halloween. A great fire festival called “Samhain” (pronounced sow-in) on All Hallows Eve signaled the close of the harvest and the initiation of the cold and dark season of winter.

On All Hallows’ Eve, it was believed that the doors opened between the world of the dead and the world of the living. All the spirits of the people who died during the previous year were thought to be traveling from their resting place to their place in the next world. Families placed food and drink at their doorsteps to sustain the spirits, as well as keep them from entering their homes, and people concealed their identity with disguises to supposedly escape harm while they walked from house to house to enjoy food and drink. Eventually the church encouraged people to distribute pastries called “soul cakes” to beggars rather than leaving food for the spirits. Many people also carved turnips to represent faces, marking the origination of today’s jack-o-lanterns.

The Celts brought their folk customs to America with them, where they took root and evolved over the years. Halloween was originally celebrated in America as a harvest festival. Carved turnips became carved pumpkins, which grew in abundance in America. Colorful costumes replaced disguises, and trick-or-treat evolved from presenting food and drink to the wandering spirits.

When Europeans immigrated to the United States, they brought the traditions of Halloween with them. Early Puritan societies in New England didn’t celebrate Halloween because of strict religious beliefs, but 19th-century immigrants continued the traditions. In the mid-1850s, Americans began dressing up and going door-to-door asking for money and treats. Around the turn of the century, Halloween lost its religious overtones and became a community-based holiday focusing on games, treats and costumes.

It wasn’t until the 1920s when the modern incarnation of trick-or-treating was celebrated in Wellesley, Massachusetts, according to the book, “Halloween: An American Holiday, an American Tradition.” The act of trick-or-treating gradually spread across America, reaching North Carolina and Florida in the 1940s and the rest of the country by the 1950s. Halloween, as we know it, thrived in the post-war era.