What are wisdom teeth?

Wisdom teeth are technically known as 3rd molars.  Teeth erupt appear in sets of four (upper right, upper left, lower right, lower left); however, not everyone has wisdom teeth, and even if they are present, the number of wisdom teeth can vary.  You may have four wisdom teeth or less or none or rarely more than four.

Wisdom teeth, if present, don’t always erupt into the mouth, and when they don’t they are referred to as impacted. Wisdom teeth actually begin forming before age 10, and if they erupt it is usually between 17-21 years old (see Tooth Eruption Chart). Third molars usually erupt in the late teen years, which coincides with passage into adulthood and is referred to by some as the age of wisdom; hence “wisdom teeth“.

Wisdom teeth are not required for normal function, have short roots, are tipped forward and cannot adequately support bridges or partials for long. Unfortunately, the wisdom teeth are now usually trying to erupt into a jaw that is too small. Wisdom teeth are considered vestigial organs (a vestige is a degenerative or imperfectly formed organ or structure having little or no utility, but in the earlier stage of development of a species performed a useful function).

How Are Wisdom Teeth Evaluated?

Wisdom teeth are evaluated by oral examination and x-rays (usually a panoramic x-ray). We also review your medical history. The x-ray helps to determine the position of the tooth within the jaw and its relationship to nearby nerves and teeth.

Pain
Of the problems wisdom teeth cause, the most common complaint associated with impacted wisdom teeth is pain. A person may have soreness or pain in the back part of the jaw, ear ache, sore throat or pain in the side of the face. The impacted wisdom tooth itself may be the source of the pain or there may be an infection associated it. Food and debris containing destructive bacteria may become trapped between the gum and the underlying wisdom tooth causing a painful infection around the crown of the wisdom tooth even though you don’t see the tooth. People may mistake repeated soreness of the gum tissue overlying the wisdom teeth as an effort by the teeth to erupt. Usually this is a warning sign of an infection. 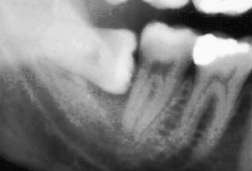 Gum Disease
This generally happens because these partly erupted teeth are difficult to keep clean, and the accumulated food particles cause the gums around the tooth to get infected. If untreated by removing the wisdom tooth, the infection may cause destruction of the bone surrounding the wisdom tooth and will affect the neighboring tooth.

Bacteria
In addition to affecting a neighboring tooth, the bacteria present around a wisdom tooth don’t just remain around that tooth, but spread to other teeth, so that the wisdom tooth actually becomes an incubation and re-inoculation source affecting other teeth. This chronic infection is now recognized to have an impact beyond merely oral health, and also has an impact on our general health and organ systems (see more click here). For people who have to premedicate before getting their teeth cleaned these bacteria pose a constant daily risk. For those with compromised immune systems, this chronic infection again poses a burden on their already taxed health (e.g. diabetes).

Impacted
It often happens that there is not enough space in the mouth for wisdom teeth to erupt. In such cases they may try to erupt in an abnormal direction, or may get locked into the jaw. This locking is known as impaction. The teeth remain completely buried in the bone of the upper and lower jaws in which they developed, a condition known as impaction. See below for Types Of Impactions. 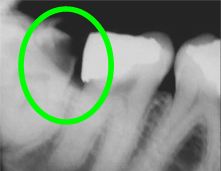 Decay
The same types of bacteria that are responsible for infections can also cause tooth decay or cavities in the impacted wisdom tooth and/or the root of the adjacent tooth. A wisdom tooth may decay unnoticed, as they are the most difficult teeth to keep clean, being so far back into the mouth.

Damage to Adjacent Root
Just the constant pressure from the impacted wisdom tooth can also lead to destruction of the tooth next to it when the tooth is impacted mesioangular (see Types Of Impactions below). This is uncommon and occurs in less than two percent of those with impacted wisdom teeth.

Crowding
An impacted or erupting wisdom tooth can push on adjacent teeth, causing them to become more crooked. Current information shows that wisdom teeth do not alone cause teeth to become crowded and crooked, but they certainly can exacerbate existing crowding. 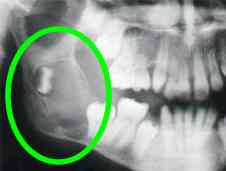 Cyst
Although the overall occurrence of cysts and tumors associated with the jaws is low, when they do occur it is most frequently around an impacted wisdom tooth. If the sac that holds the crown of the wisdom tooth remains in the bone, it can fill with fluid, forming a cyst that can destroy surrounding bone. These are rare.

Pericoronitis
The flap of gum tissue, called an operculum, which partially covers an erupting wisdom tooth creates a place where bacteria which normally live in the mouth to flourish, multiply and cause an infection known as pericoronitis (inflammation around the crown of a tooth). Such an infection is felt as swelling and pain around the area. Sometimes the tooth is trying to erupt, but has not yet broken through the gums. When the upper tooth bites down onto this gum pain can be caused. If the infection worsens, it can become a serious infection. People may mistake repeated soreness of the gum tissue overlying the wisdom teeth as an effort by the teeth to erupt. Usually this is a warning sign of an infection.