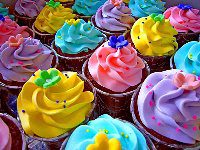 Sweets have been an important part of nearly every culture. The importance to dentistry has been the danger of decay from too many sweets; although it is important to note that current information recognizes cavities can also be caused by other sticky foods and complex carbohydrates like potato chips and crackers.

Sugar typically has referred to table sugar or sucrose, but there are many sugars and sweeteners in common use today.

Invert sugar is a mixture of glucose and fructose that are levorotatory (turn plane of polarized light to left). Raw sugar and molasses are produced from sugarcane in the process of extracting sucrose. Caramel is obtained from sucrose heated above 356º F.

See the table below for comparisons and information.